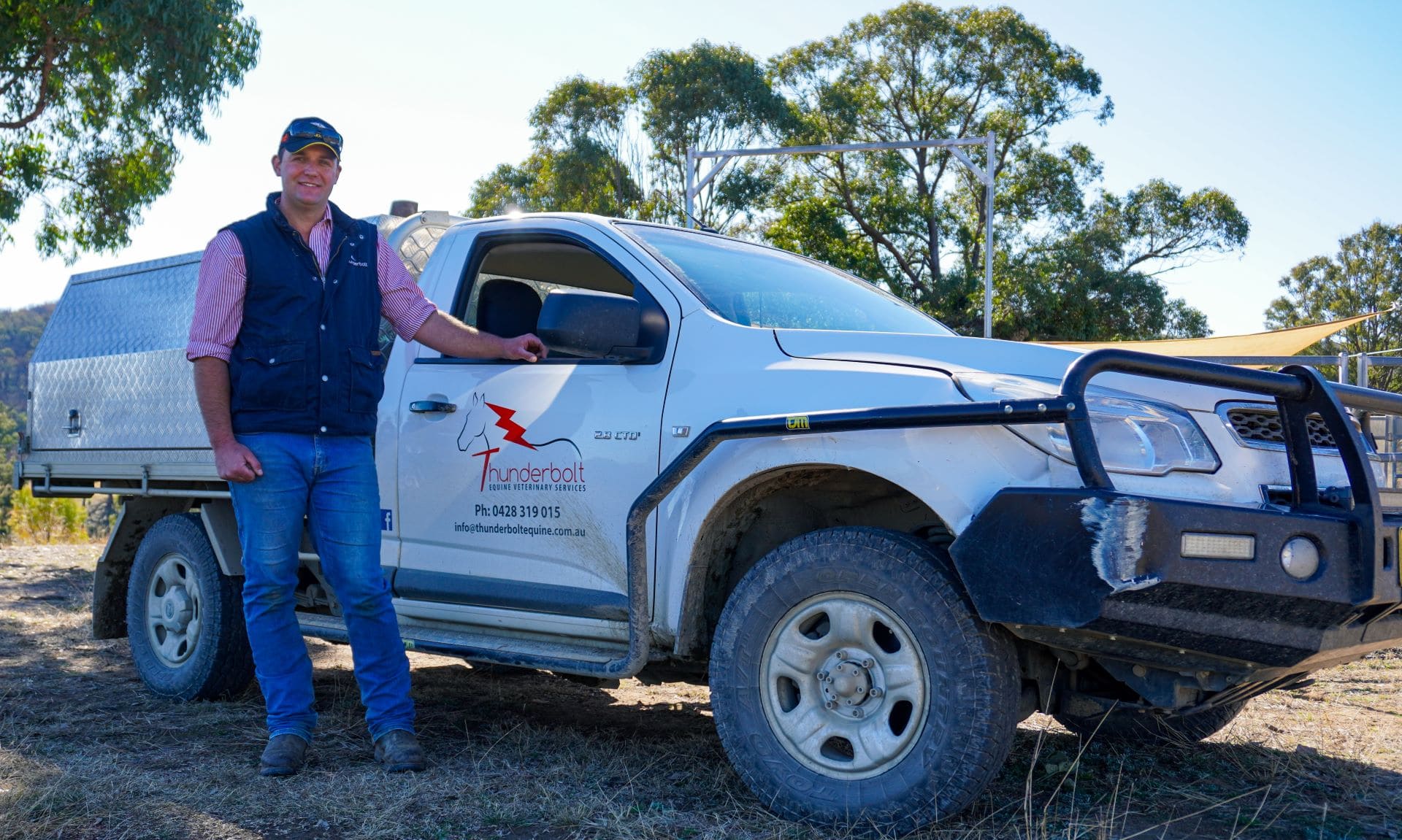 Tell us a bit about yourself.

I went to school in Armidale at TAS and then moved away to the University of Queensland in Brisbane to undertake my veterinarian degree. I stayed away for a little while, working mostly in equine hospitals in southern Queensland until I moved down to Melbourne to work at the Melbourne University equine hospital. I worked there for a couple of years before deciding to come back to the New England area to set up a veterinary practice.

Did you always want to be an equine vet?

I always wanted to be a vet and I grew up with horses. Initially, I thought I wanted to do all species,  but when I started studying at uni I realised that horses were the only things that actually interested me.

How did you end up back in Armidale?

I thought it was time to set up and do my own thing. I knew there was a big demand up here, so it seemed an obvious place to come to. Previously, people had to take their horses down to Tamworth or Scone – or even further away – so the opening was there, and I was keen to come back.

The ‘New England Equine’ name was already taken, and I wanted a name that had something to do with the area. So, rather than just naming the business after a specific town, I decided to use ‘Thunderbolt’.

What have been some of the challenges in running your own business?

Well, I’ve been going for a bit over a year now. So far, we’ve had a once in a hundred-year drought, once in a hundred-year bushfires, once in a lifetime pandemic… so that’s probably enough challenges! Other than that – and maybe I should’ve expected it – it’s been challenging getting people to even think to call me rather than just putting their horses straight on a truck to Tamworth or Scone. Most people are so used to that that they don’t even think to look locally. That’s been a big thing. It’s also been economically challenging times for people, so it has been a little bit hard to get off the ground.

I like the independence. I can do things my way and I don’t have to follow certain company protocols.

Longer term, the sky’s the limit. It really depends on what the demand is and what people want. We are here to look after the local equine community, so we will shape the business to fit with that.

What advice would you give to someone just starting out?

I’m really good at pushing paperwork to the side and letting it pile up. So my biggest piece of advice is not to do that! Once you have the paperwork sorted, getting out there and networking, going to community events where you can meet people is probably the number one thing to do.

What do you love about this area of work?

I love getting out and seeing people with their horses. It’s great to be able to get their horses back on track and get them back competing again or producing foals and winners. I love being able to see my patients out and competing or working.

Probably my main interest, what I really like, is any of the medicine type of stuff. So, treating sick horses and particularly how that relates to performance – poor performance workups. Sports medicine and equine athletes really interests me.

What’s your secret to success?

I don’t know that I have one. Probably just being there, being available when people call you, and being able to answer their questions or knowing where to find the answers and providing the client with what they want.

What’s next for Thunderbolt Equine Vets?

Short term, we’re planning to expand a bit more. We’ve just purchased a property at Castledoyle where we will operate a small hospital. We have facilities to agist mares and stallions for assisted reproduction (artificial insemination, semen collection and embryo transfer). We will also have stables to hospitalise sick horses and foals and provide a much higher level of care than is possible on a farm. We will be fully operational for the start of the 2020 breeding season, which  starts in a few weeks.

Would you look at getting other vets on board?

Yes, eventually. When we get a better idea of what a ‘normal’ year is and get busier we will expand down some specialty routes that will specifically focus on the equine needs in the local area.

I just want people to know we’re here and to give us a go before they put their horses on the truck to Tamworth or Scone. You’ll be surprised – I can do most things here in Armidale that people possibly thought they had to travel to get done. That’s a win-win situation for everyone!

I recently graduated from Sydney University with a media & communications degree and now run my own start-up videography business in Armidale, called 'Reel Spark'.

Beattie: Hang in there, that’s a big one. Hang on while that horse is bucking and jumping around. Try and make friends in the local area – it’s great to have support. With networking, you can support each other, so getting those connections and friendships is important. Social media is a really big help in our industry, especially now because when people want to know something about a business, they often check Facebook. Have an imagination about what you can achieve, but also be able to bring some of your ideas down to a doable thing.

David: You must be very driven. Your business needs to be your passion. Try to find all possible avenues of getting the word out there for your product. If you can, think slightly longer term, then hopefully you can last the distance over the first five years. You need to be realistic about goal setting as well. And it’s good if you have family support and a good support network.