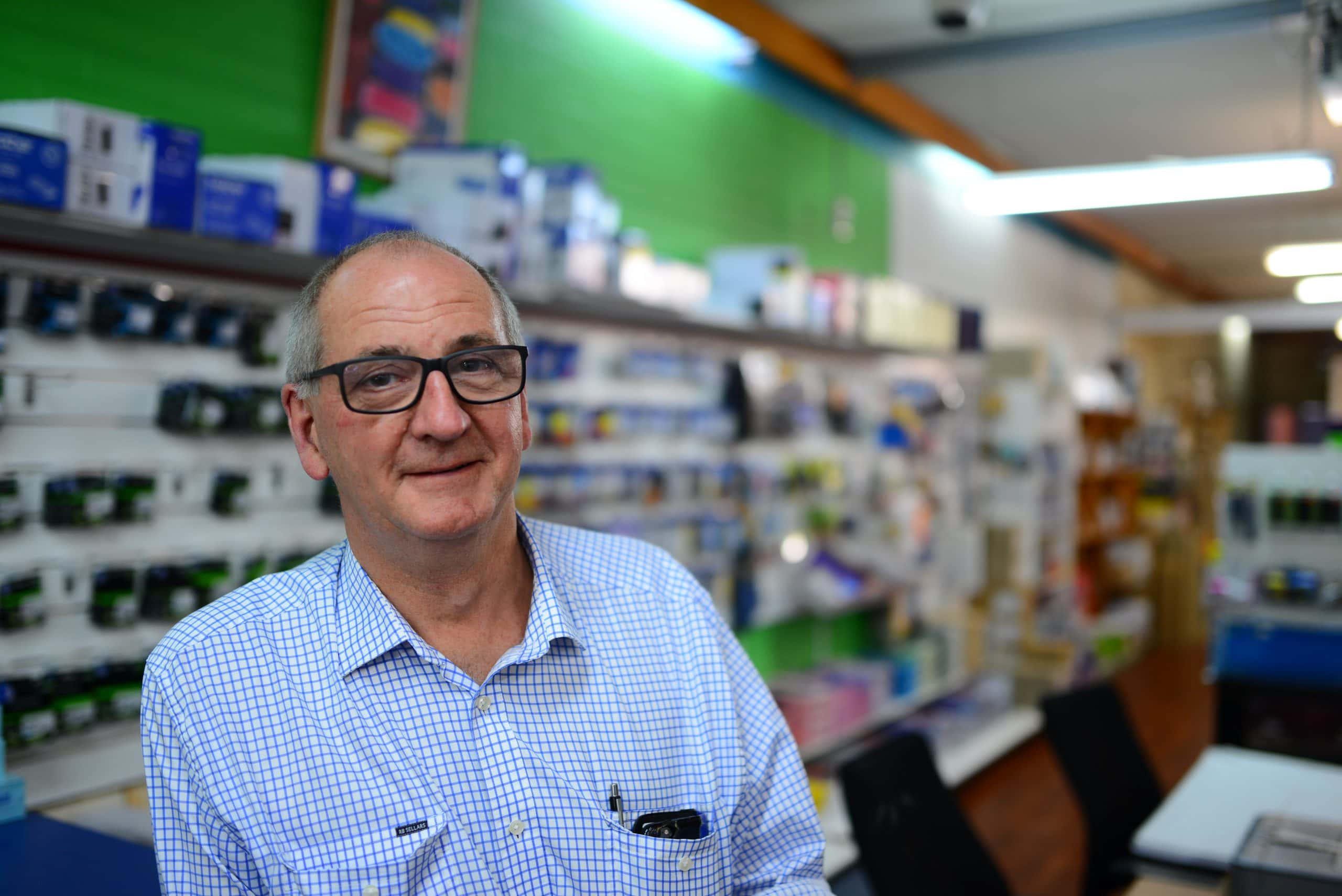 This week Vivid Minds Vivid Futures interviews Jonathan Roberts, owner of Office Express. Office Express supplies businesses in Armidale and across the New England region with all their office needs, from pencils and rubbers to office fit-outs, and everything in between.

I was born in Coolah NSW but grew up in country towns across NSW. My father worked for a bank and we moved every few years. I’ve lived in Coolah, Mungindi, Trangie, Dubbo, and Crookwell, to name a few. Growing up, I went to three different primary schools before attending boarding school in Sydney. After finishing school, I spent some time in Sydney before moving back to the country. I spent 18 years in agriculture, starting off as a jackaroo, and then a contract musterer, then a stockyard builder, and then I managed both sheep and grain properties. Later, I moved to Mooball on the North Coast and, with my brother, bought a service station which had a large fruit shop and a café attached to it. We later also bought a small farm where we grew bananas, avocados, pawpaws, and ran some cattle. We later sold the farm and servo, and then I worked for a season harvesting wheat from Emerald, all the way down to Gunnedah.

A job opportunity then came up to manage a property out at Lighting Ridge. To get that, I had to go to Sydney for the interview. While I was there, I attended a party where I met my now wife. I got the job and two years later we married. We first lived at Goodooga, where our twin boys were born. After that we moved up to Brisbane where I managed a fencing manufacturing business – we made fences and gates for MI Steel. We were there for about four years when we decided to move to Inverell, where we purchased and ran a supermarket. During our short stay in Inverell, we had our third and final son. Unfortunately, Woolworths moved into Inverell and we, along with some other small businesses, were forced to close. In 2002 we decided to move to Armidale where there were better education opportunities for our children, and we’ve been here ever since

I started Office Express from my garage at home, knocking on doors and selling office supplies to businesses around the north west. We mainly sold inks and toners and business printers. Then in 2005 we moved into Moore Street and opened our retail store to the public. Since then, we have expanded our range to supply everything a business may need.

What does Office Express do?

We supply office supplies: from pencils and rubbers to full office fit-outs, and everything in between. We help set up businesses, home offices, and have a full retail shop. Business to business is about 60% of what we do, and our retail shop for consumers is the rest. We sell office furniture and can help with printing solutions, supplying office machines, and also help with laminators, guillotines, and shredders. We also carry all consumables from paper to binders, pens, toners, and inks, and supply offices and with teas and coffees, cleaning products, disposable cups. We have everything that the big office supply stores have but with a local touch.

Customer service is a big one: try to get to know your customers, and get to know how they like you to service their business; do we just go and fill the stationery cupboard for them? Or do we call them or wait for them to call us? Know how they like to be served, and then serve them in that way.

What have been some of your challenges in starting a business?

Cash flow, which is a challenge for everyone in business, I think. Starting from scratch was hard. I really didn’t know anything about the industry, so I was learning as I was going along. I had to do a lot of research to solve people’s problems. Another thing was convincing people that we could supply everything that the big companies could. We might be small, but we have access to a full range.

There was nothing very likable at the start because it was all very hard work. But now we can get away a bit on holiday and I can choose my own hours. I like being able to make on-the-spot decisions. I’ve also been lucky with staff, which has been a huge help in the business. I don’t think our business would run so well if it wasn’t for my amazing staff.

Manage your cash flow. You must be careful about not overspending to start with, and then manage it on an ongoing basis. It’s important that you don’t over-capitalise from the beginning or spend too much money on stock. It’s a tough gig with money. It also helps to have little bit of knowledge about what you are going into, especially what’s involved with running a business.

Be consistent. Call your customers and stay in contact and build a relationship with them. It’s important to provide what you say you will provide and be consistent in that provision. Customer service is a big one: try to get to know your customers, and get to know how they like you to service their business. Do we just go and fill the stationery cupboard for them? Or do we call them or wait for them to call us? Know how they like to be served, and then serve them in that way.

What’s next for Office Express?

We would really love to expand the office fit-out side of our business and sell more office furniture. We have a great product and we’re competitive on price. Over the years, I have gained the experience to know what works in an office space and have worked with numerous suppliers to find and provide the highest quality products.

Plan! Plan well, keep yourself open to opportunities and don’t overextend yourself. You also need to be good at what you do and then back it up with really good customer service. People really respond to that. If you don’t have that right, you may as well close your doors. In our case, we also focus on fast and efficient turnaround while offering really good value.

I’m really good at pushing paperwork to the side and letting it pile up. So my biggest piece of advice is not to do that! Once you have the paperwork sorted, getting out there and networking, going to community events where you can meet people is probably the number one thing to do.