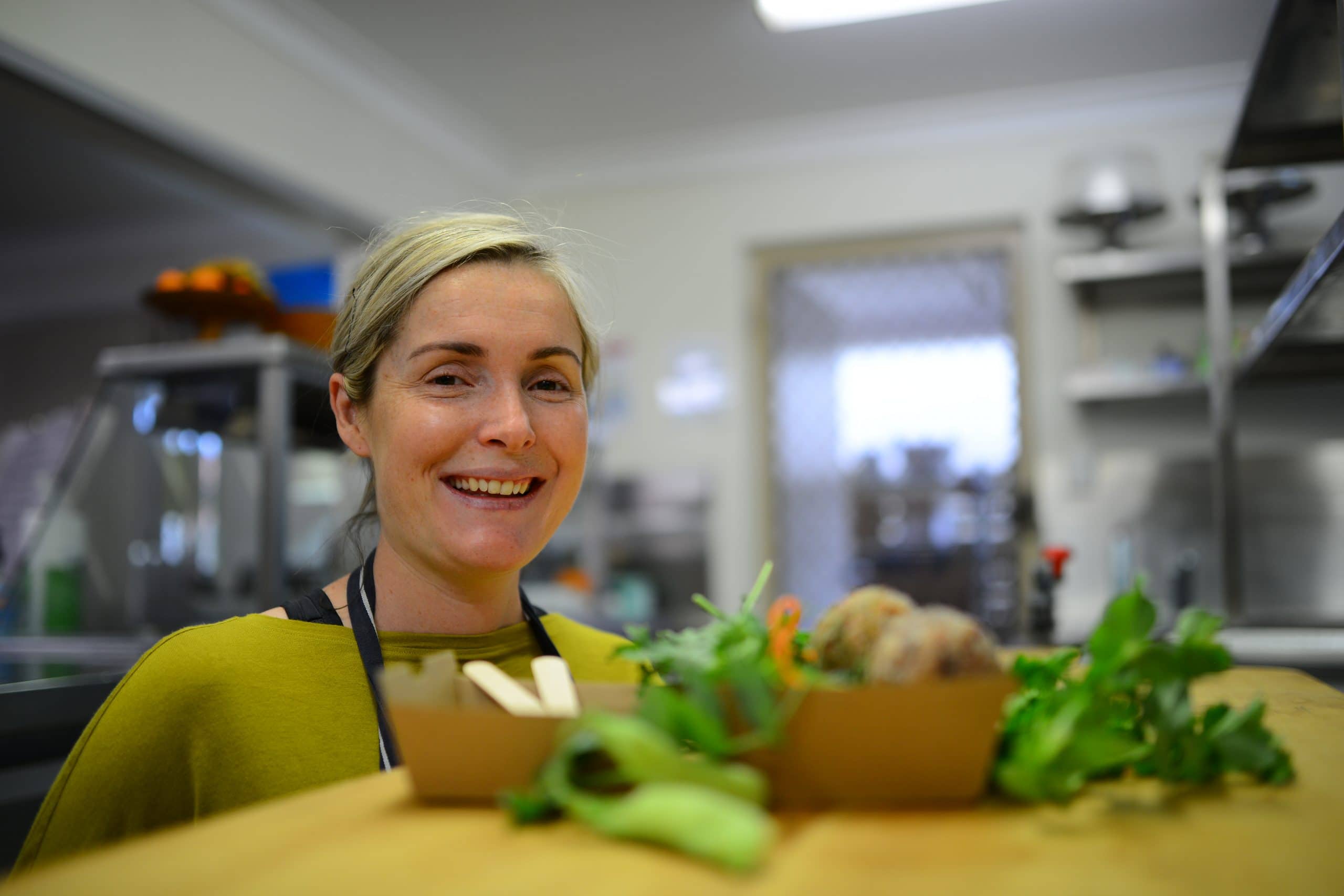 I was born in Sydney and raised on the Mid North Coast. At 19 I decided I wanted to be a chef and moved to the Byron/Ballina area to start an apprenticeship. I did well and was awarded Apprentice of the Year for the Far North Coast.

What led you to a career as a chef?

Chef-ing is in my blood. My father was a chef and there are nine chefs on Dad’s side of the family. One of my aunts was a chef on the super yachts in the Caribbean. On my mother’s side, I learnt how to bake from my grandmother.

After finishing my apprenticeship, I travelled, working in the Northern Territory for several years and then taking over as Head Chef at a couple of big pubs. After a while I decided I wanted to shift to fine dining. I moved to Sydney, working at the Icebergs Dining Room and Bar.

What brought you to Armidale?

I was working 16 hours a day, living in a beautiful art deco apartment, but I never saw daylight. In fact, I think I went to the beach once. I was burning out and really wanted a slower pace. With family and friends here, I decided Armidale was the place for me. I lived and worked here for a couple of years before heading back to Darwin.

In Darwin I worked for a chef agency in a fly-in fly-out role. I was dropped into a failing restaurant, often in an isolated area, to fix whatever was broken. I’d work three months straight then break for a month. I was working up to 80-hour weeks – no time for anything but work, meals and sleep. I travelled England for a couple months, before returning with $50 to my name. Once again, Armidale called to me.

I came back not really intending to stay but I met Shane, who was at a crossroads himself. Six years later we’ve two children and we’re building a house and a business together.

What does Buddha Belly Kitchen do?

We do eclectic quirky fusion cooking. I love combining foods that should clash and making it work. We also cater for vegans and gluten free. These days you won’t just find us at the markets. We do corporate catering across the New England and the Coffs Coast area.

We’re famous for our Buddha Balls. They’re not an arancini and not a falafel – they’re my own unique creation. I created the recipe as part of my studies in Year 10 – I got 100% for creativity. They are tricky to make; people have tried but they haven’t been able to copy them.

We started Buddha Belly Kitchen in 2017. I was working in the TAS kitchen, and while I enjoyed it, it didn’t give me room for creativity. I wasn’t challenging myself and I felt it was time to do something else. The question was, what next? We’d done a couple of markets and Shane suggested we could do this.

Nothing was perfect to start. We hand-painted our signs and had a dirty old marquee. We kept that marquee for two years – and sold a lot of great food out of it!

It was a side gig at first – something that I wanted to do, not something someone had told me to do, and it was ours. One day we decided we could do this as a full-time business.

We do eclectic quirky fusion cooking. I love combining foods that should clash and making it work.

How did you come up with your name?

We started selling soups and Chai tea as the Winter Warmers. Our plan was to change our name to match the seasons, but that only lasted a couple of months.

Shane and I wanted something interesting, quirky, that would help people remember us. My aunt added Kitchen to it and Buddha Belly Kitchen was born and our Crispy Rice Vegetarian Balls became Buddha Balls.

What have been some of your challenges in starting a business?

At first it was a side gig. I continued working full time at TAS while doing Buddha Belly Kitchen on the weekend. There was a lot of travel. We packed up the marquee in the heat and rain, lost tables in storms, got up at 4am every morning, sometimes 2am, seven days a week to get Buddha Belly off the ground.

I’d just left my job, ready to make Buddha Belly my full-time focus and along came COVID-19. That was a massive challenge, but we’ve managed to hang on. If we can make it to next year, I feel like there will be no stopping us.

Being a chef is a lot easier than running a business, but I thrive on challenges. I’ve tried to keep learning along the way and have had some great mentors. I love the flexibility and the freedom to be creative when you’re your own boss and the fact that it is your own.

If you don’t know something, you can learn it, or you can outsource it. Think about what makes you stand out. Don’t create a business in an area that’s flooded already; people want something unique and different.

I’m inspired by other people in the culinary world. I’m always learning from others. I like to experience fine dining and learning new ideas and techniques. I have a million delicious books which I turn to for inspiration.

I’m inspired by people who have built successful lives when they have come from hard times and have turned life’s lemons into honey through hard work and determination. You’ve got to dust yourself off and just get on with it.

Challenging myself, being creative and working hard. I’ve never worked less than a 50-hour week. Never give up. Life can sometimes feel like you are taking five steps forward and three steps back. You have to keep going.

What’s next for Buddha Belly Kitchen?

We’ve been hibernating because of the effect COVID but we’ll be back at the markets in two or three weeks, which is when our new marquee gets here.

We are also expanding our corporate catering and developing our offering for weddings and functions with some new and interesting menus.

We’re also introducing a private chef catering service where we come to your home and bring the full fine dining or banquet experience. We’ll serve your drinks, tea and coffee and clean up afterwards. We’ll have menu options, or we’ll work with you to design your own. Our first private dinner is on 14 November.

Ingrid Rothe is an award-winning brand and marketing strategist and founder of Vivid Thinking. For Ingrid, marketing is not about selling products or services, rather it’s about telling brand stories with heart.

Beattie: Hang in there, that’s a big one. Hang on while that horse is bucking and jumping around. Try and make friends in the local area – it’s great to have support. With networking, you can support each other, so getting those connections and friendships is important. Social media is a really big help in our industry, especially now because when people want to know something about a business, they often check Facebook. Have an imagination about what you can achieve, but also be able to bring some of your ideas down to a doable thing.

David: You must be very driven. Your business needs to be your passion. Try to find all possible avenues of getting the word out there for your product. If you can, think slightly longer term, then hopefully you can last the distance over the first five years. You need to be realistic about goal setting as well. And it’s good if you have family support and a good support network.