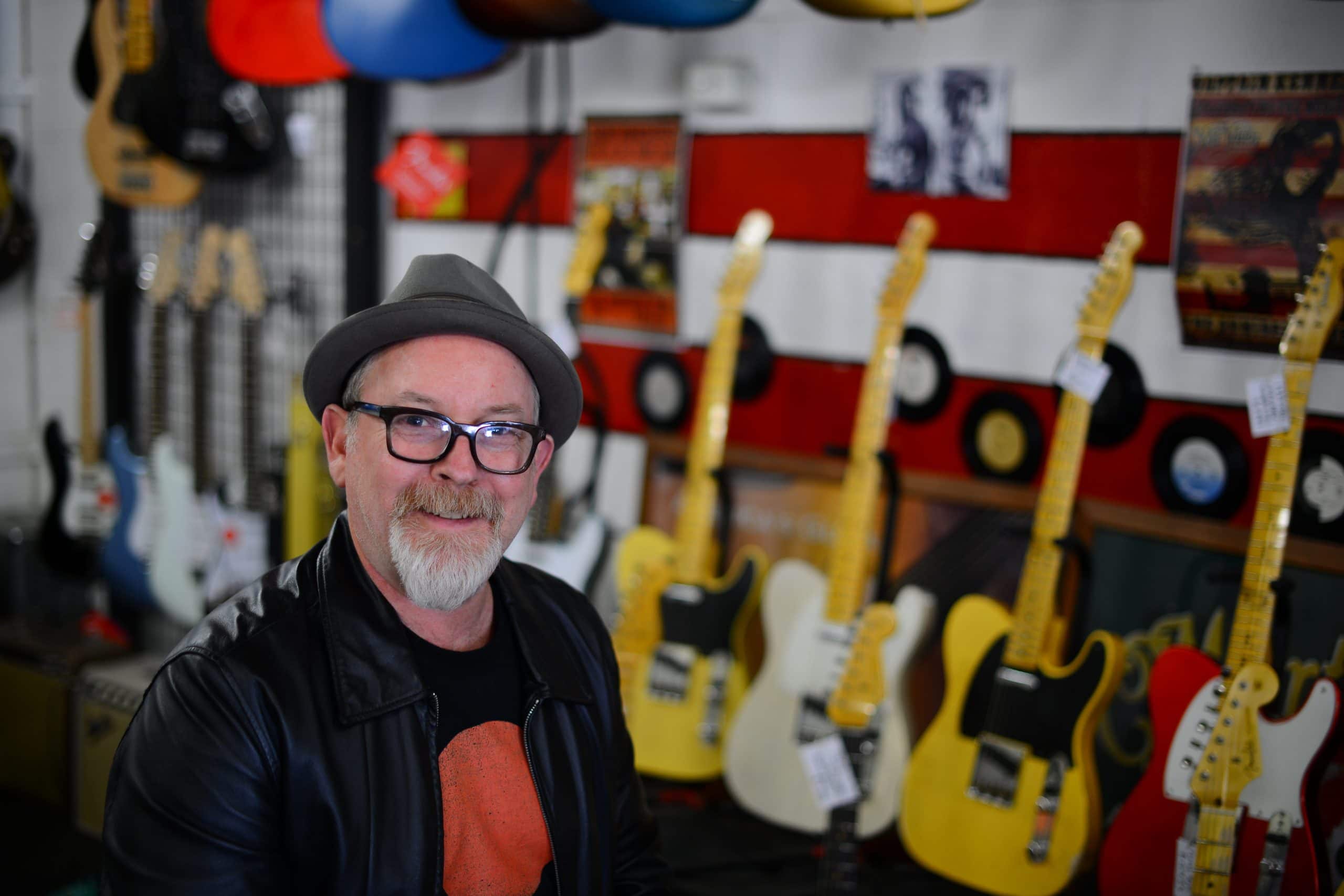 This week Vivid Minds Vivid Futures interviews Tony Elder of Black Dot Music. Tony, together with his team, aim to enrich people’s lives through music. Black Dot Music is more than a retail store – it also provides referrals for teachers and connects people who want to play music together.

I was born and raised in Wyong on the Central Coast, and after finishing the HSC I moved to Armidale to study a Bachelor of Arts at UNE. It’s at UNE that I really got into music, and where I formed Broken Arrow, my first band. We played gigs all over the New England, then moved to Sydney for about a year, at which point the band broke up, so I came back to Armidale. After some time in Armidale with a new band, we decided to move to Melbourne, where I worked at the National Centre for South Asian Studies. After that band broke up, I moved back to Armidale and I have been here for the last 25 years.

It’s here that I met my wife, Carol, and we got married, bought a house, and had a child, Alex, who now works in the shop. I kept coming back to Armidale because I absolutely love it. It’s a great town. Here you can walk to work, there are great people with whom I’ve built a social circle, and the cold weather is just nicer. I remember when I first came to Armidale, just thinking, ‘Man, winter is the best in this town!’ And you know what? So is summer!

What does Black Dot Music do?

We provide an opportunity for people to enhance their lives through music. We don’t just retail musical instruments, we also provide information for teachers and connect musicians who want to play together. We have been responsible for forming local bands and partnerships, we organise gigs and festivals. We’re very connected to the community, and our customers are our friends. One thing we used to do on a regular basis was host Red Rug Sessions for anyone wanting to showcase their own music.

What are Red Rug Sessions?

Red Rug Sessions are where people get a chance to play their original material in a quiet and respectful environment. We haven’t had one in a while, but as soon as we can, we will get up and running again. We have had some serious talent come through, such as Steve Thorneycroft, Steve Tafra, Kez Watson, Matt Knights, Chris Purcell, Mark Cooper…there’ve just been too many to name.

The shop has been here for 35 years. It was originally opened by Peter Harkins from Tamworth . I began as manager 20 years ago and took the reins in partnership with my wife Carol in 2012.

I like what I’m doing, I like the town I’m in, I like people, and I get to engage in a large cross-section of our community, from rock and rollers to UNE professors and high fliers. I like talking to people and getting them into music, and making a positive impact on their lives.

What have been some of your challenges in running a business?

As we’re in a rural area, most recently the drought followed by fires was hard; there’s more money in mud than dust. Really though, our challenges are no different to anyone else. I think for myself it’s also dealing with my own mental state and trying to stay positive through it all. However, I like what I’m doing, I like the town I’m in, I like people, and I get to engage in a large cross-section of our community, from rock and rollers to UNE professors and high fliers. I like talking to people and getting them into music, and making a positive impact on their lives.

Making the decisions myself, being in charge of my own destiny. There are good things about it, but there are also things that are challenging. The buck stops with me when something goes wrong. I’m incredibly lucky to have Steve and Alex on the team as well as great supporting contractors.

I’m inspired by talented people. I love listening to musicians play. I also get inspired by nature; I love gardening and flowers and being outdoors. But it’s the people who have incredible musical ability and who are humble – that’s the most inspirational thing to me.

Occupy the crease, Steven Smith style. People come in and they want to see the same face day after day. It’s consistency; we are here every day providing that. Someone might come in and say, ‘I bought a guitar from you 20 years ago’. I know people I’ve sold guitars to, and now I’m selling their children guitars. That can be hard, but I just keep at it, providing that consistency, making sure I’m always here.

What’s next for Black Dot Music?

We are going to be doing the same thing we have always done; being here, providing consistency, but better and faster and stronger. We want to continue serving the community, enhancing people’s lives through music. And, we want to be restarting Red Rug Sessions as soon as possible to promote local music and artists.